Here We Go With Pictures

Finally Sean has come to show me how to get pictures from a camera into the computer and then into the blog!

Hopefully these shots of Sean with a hat will show up.  Later on we will add more pictures. 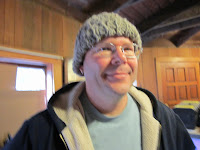 February was not a nice month for Treecroft Farm.  There was a lot of construction going on and in the middle of it, two of my sheep died.  First, I found my ram lamb Little Guy lying by the feeder early one morning when I went out to feed the sheep.  His body was still warm.  He had been fine the evening before, ate all his supplement as well as hay.  It took me all afternoon to bury him.

Then, the following week, I had the vet come out to look at two older ewes who were losing weight and had lost most of their fleeces.  Since they were eating como loco and otherwise seemed healthy, I was still concerned.  The vet came and caught Ma Joie, a badgerface.  He was in the middle of taking her temperature when he said that he heard an ewe on the other side of us struggling fro breath.  We rushed over to her but it was too late.  It turned out to be my favorite little brown ewe Athena. She, too, had had no signs of illness.  I had been in the shelter all Sunday afternoon and none of the sheep were having problems breathing.  No coughing, no snotty noses.

The vet suspected a parasite problem and examined the hay I was feeding, which was a good grass hay.  I built feeders and do not feed the sheep on the ground; I have a regular worming and vaccination program.  The sheep are not due for anything until mid-March.

The next day I called the feed store and asked them if the sheep hay I bought was supposed to be alfalfa or grass and they said it was straight alfalfa, very fine cut; so I told them what the vet said and they came and exchanged the grass for the alfalfa.  We assume that was a delivery mix up.

Then I called the vet to find out the results of the fecal sample he had taken. The results were not bad at all (100 worm eggs per gram) and this blew the vet's whole theory.  I did some reading and checking in my book on sheep health; it is possible Athena bloated or had something caught in her airway.  I contacted Laurel Gates who also raises Icelandic sheep; she said that she, too, felt the local vets did not know very much about sheep.  She had sent carcass samples to UC Davis when she had a similar problem.  That turned out to be a flu, which is rare in sheep.  The fleece loss was due to a brown mite, and that problem went away by itself.  Like Laurel, I avoid pesticides.

I have not lost any more sheep.  Everyone seems fine.  They have great appetites.  Cleaning out the sheep shelter has been a problem because there have been too many people working around here.  A new deck was just completed Friday.

We have had torrential rains and several moderate earthquakes. Together they messed up the front of the house, taking out a large section of slope and fence.  The driveway slope was sheered off about three feet its entire length.  About 30 feet of fence had to be rebuilt, using ten foot metal T posts. Unfortunately, the daffodils planted on that slope have not appeared.  The land is still slipping and I am not sure what to do about it.

Hopefully, soon, it will be spring and plants can be set out.  The soil on the slopes is very fertile, with lots of humous.  From what I have read, soil fertility plays an important role in soil erosion control.  I have a lot of Escallonia, Butterfly bushes and Rosa Rugosa growing elsewhere on the slope.  That part was not affected at all by the storms.

I can't do everything in one day.  That's for sure.  I have been trying to catch up on the spinning, too.  Finished a bobbin of multicolored yarn and have that hanging up to dry in the house, where the wood stove warms things up.  Started a bobbin of creamy white with tan and brown streaks.  I think this is another part of Xerxes' lamb's wool.  I haven't made too many mistakes in it yet.

It helps to keep my hands busy.  Then I don't miss Little Guy and Athena so much.  Nature is at work all the time.  Death and destruction are a part of it.  Making things new is a part of it. Change and renewal are a part of it.  Taking care of the land, little by little, day by day, is what I love to do.
Posted by Kathleen Capps at 9:59 PM No comments: